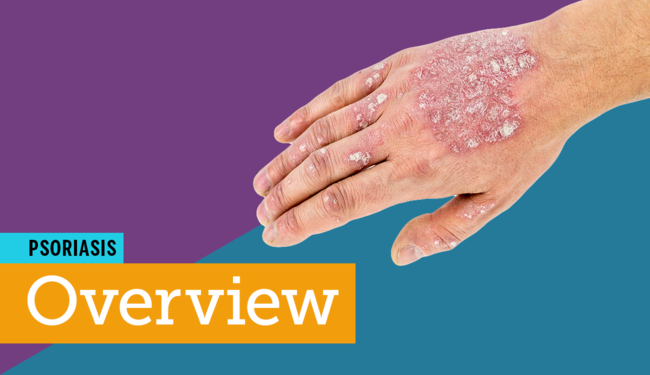 Psoriasis is a chronic condition that causes inflammation and the accelerated production of skin cells. Skin builds up more quickly than it can shed, causing patches of thickened, scaly skin that can crack, bleed, and itch — as well as other symptoms. Inflammation causes the redness of psoriasis rash, as well as the pain, swelling, and joint damage of psoriatic arthritis. There currently is no cure for psoriasis or psoriatic arthritis, although recent treatments can control this disease effectively.

Psoriasis is not contagious. You cannot catch it by touching someone with psoriasis, even if they are in a flare state with visible patches. Unfortunately, fear of contagion is a common stigma that socially impacts people living with psoriasis.

The cause of psoriasis is unknown, although it likely involves both hereditary and environmental factors. Read more about causes of psoriasis.

The History of Psoriasis

Psoriasis has been around since ancient times, seen even in mummies unearthed in Egypt. Psoriasis was usually considered a contagious disease, and people who had it were stigmatized in many parts of the world. In some communities, people with psoriasis were forced to ring a bell as they walked, like lepers, so people could avoid them. The famed ancient Greek doctor Galen gave the condition its name; psora means "itch" in Greek. Interestingly, tar was identified as an effective treatment for psoriasis during this time period. However, arsenic was also prescribed.

In 1840, Austrian dermatologist Ferdinand von Hebra distinguished psoriasis as separate from and unrelated to leprosy. In the 19th century, sunlight was noted as an effective treatment for psoriasis. It wasn’t until the 1960s that the medical profession realized that psoriasis is an autoimmune condition. In the same decade, psoriatic arthritis was identified as a separate but related condition.

Understanding the underlying autoimmune triggers of psoriasis has led to improved treatments. These include Corticosteroids and traditional immunosuppressants — such as Cyclosporine and Trexall (Methotrexate). They also include newer biologics like Humira (Adalimumab) and Enbrel (Etanercept) that specifically target the overactive pathway of the immune cells that cause inflammation and accelerated skin cell production. Read more about treatments for psoriasis and psoriatic arthritis.

How Common Is Psoriasis?

It is estimated that 2 percent to 3 percent of people worldwide have psoriasis. In the U.S., roughly 7.5 million people are thought to have psoriasis. Psoriasis affects women and men about equally and is thought to be more common in people of European descent.

How Is Psoriasis Treated?

Psoriasis treatments are typically aimed at modulating the immune system to calm inflammation and reduce autoimmune attacks on the skin and joints. Psoriasis treatments may be applied topically to the skin, taken orally, or administered via injection. Phototherapy, or light therapy, may also be helpful in some cases. Some people with psoriasis feel better when they change their diet or try complementary or alternative therapies, such as acupuncture or acupressure. Read more about psoriasis treatments.

What Are the Symptoms of Psoriasis?

Psoriasis affects each person a little differently. Symptoms depend on the type of psoriasis and can appear or disappear at any time. Symptoms often appear near the joints — especially elbows and knees — but can also be found on the scalp, face, hands, and other parts of the body. Symptoms worsen during flares (also called exacerbations) and may subside during periods of remission.

The most common symptoms include red, scaly patches on the skin that can crack or bleed; shedding skin; and itching, burning, or stinging sensations. Other symptoms may include thick, white or silvery scales on the skin and nails that are thick or ridged. In cases of psoriatic arthritis, symptoms can also include swollen, painful joints and joint damage and deformity. Read more about psoriasis symptoms.

Psoriasis symptoms can come and go with flares. Common triggers for flares include stress, smoking, alcohol consumption, some medications, and even cold weather.

Is There a Psoriasis Diet?

What is the difference between psoriasis and eczema?

Where does psoriasis usually show up on the body?

Kelly Crumrin is a senior editor at MyHealthTeams and leads the creation of content that educates and empowers people with chronic illnesses. Learn more about her here.
hug (20) like (32) comment (27)
sign up to view previous comments 1 of 27

Sunlight is good for psoriasis if you can get it. where is it? there are some different shampoos or creams to try. Best thing to do it go to a dermatologist though.

Tea tree oil is a popular natural remedy for different skin conditions. Some people use this...

Tea tree oil is a popular natural remedy for different skin conditions. Some people use this...
read article >

Inverse psoriasis, also known as flexural or intertriginous psoriasis, is a rare and painful form...

Living with a skin condition can impact every part of your life, from your sleep schedule to...

Living with a skin condition can impact every part of your life, from your sleep schedule to...
read article >

One of the most difficult aspects of psoriasis is its unpredictability. Once you have psoriasis...

One of the most difficult aspects of psoriasis is its unpredictability. Once you have psoriasis...
read article >

close
ABOUT PSORIASIS TYPES DIAGNOSIS CAUSES SYMPTOMS TREATMENTS RESOURCES
New to MyPsoriasisTeam? Learn More
Quick Links
Q+A Treatments A-Z Resources News Are you a provider? Crisis
About Us
What is MyPsoriasisTeam? Partner with us Terms of service Press/News Privacy policy Cookie policy
Help With This Site
Getting started FAQ Community guidelines Contact us