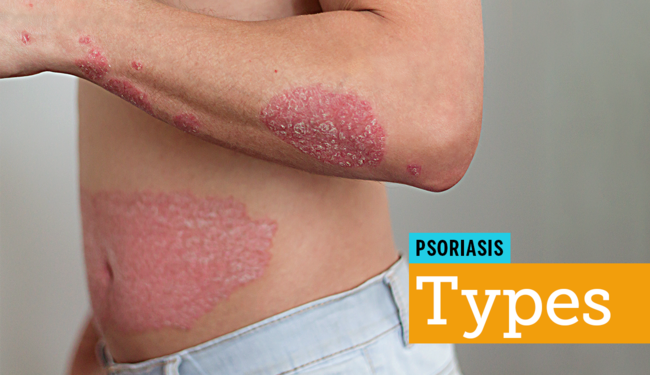 Locations of Psoriasis on the Body

Different types of psoriasis can form on any area of the body. The location of psoriasis determines the kinds of treatments your dermatologist will prescribe.

Facial psoriasis is common, affecting around 50 percent of people with the condition. Facial psoriasis can be found on the upper forehead, around the eyes and eyebrows, and on the skin between the nose and upper lip.

Psoriasis can also occur in and around the ear. In some cases, scaling can build up in the ear canal and lead to hearing loss. If this occurs, do not use objects to remove the scaling and consult your doctor.

Scalp psoriasis affects 45 percent to 56 percent of people living with psoriasis. It commonly forms along the hairline, and on the scalp, forehead, skin around the ears, and back of the neck. Scalp psoriasis can look like dandruff or appear as thick plaques that cover the scalp.

Psoriasis can also form on the skin covering the hands and feet — known as palmoplantar psoriasis (PPP). About 12 percent to 16 percent of people living with psoriasis will develop psoriasis on their hands or feet. PPP can have a great impact on quality of life, as expected for a disease affecting hands and feet.

Nail psoriasis is also a common condition, affecting around 50 percent of those with psoriasis. It typically affects the fingernails more than the toenails, and can even be an indicator of psoriatic arthritis.

Genital psoriasis typically develops in people who have psoriasis on other parts of their body. Almost two-thirds of people with psoriasis will have genital psoriasis at some point in their lives. The skin in this area is extremely sensitive, so it is important to find a safe, effective treatment with the help of your dermatologist.

Genital psoriasis can affect several areas around the genitals, including:

There are five main types of psoriasis — plaque psoriasis, guttate psoriasis, inverse psoriasis, pustular psoriasis, and erythrodermic psoriasis. Each type can be found in various locations on the body and is treated differently.

The most common type of psoriasis — plaque psoriasis — makes up 80 percent of psoriasis cases. Also called psoriasis vulgaris, plaque psoriasis typically affects the elbows, knees, back, torso, and scalp, but may appear elsewhere. The condition is characterized by thick patches (plaques) of skin that can crack or bleed where the skin bends at joints.

On lighter skin, plaques are often covered with silver or white scales caused by the buildup of dead skin cells. On darker skin, plaques may be thicker with gray, purple, or brown coloring. Plaques can become inflamed, causing intense itching, burning, and soreness.

Topical therapies like creams, ointments, and moisturizers are commonly used to treat plaque psoriasis. These contain anti-inflammatory active ingredients, such as:

Topicals are usually the starting point of treatment. In more severe cases that are spread over large areas of the body, oral or injected immunomodulating drugs (known as biologics) may be necessary to control plaque psoriasis.

Also called flexural or intertriginous psoriasis, inverse psoriasis causes smooth patches of red skin that feel painful. The characteristic silvery, scaly patches of psoriasis are often not seen in this form. Inverse psoriasis is more common in overweight people and usually appears in skin folds where sweat and friction occur — such as the armpits, genitals, and under the breasts. Other causes include infections, taking certain medications, and stress.

Treating inverse psoriasis can be challenging because the areas it appears tend to be extremely sensitive. Medication also absorbs more effectively there, increasing the likelihood of side effects. Some treatments that work for other types of psoriasis tend to irritate inverse psoriasis. It is often misdiagnosed as a fungal infection because it can look like jock itch. Your health care provider may also recommend powders to help keep the moist areas dry.

Pustular psoriasis, an uncommon form of the disease, causes intensely red or darkened skin with sterile, pus-filled blisters (pustules). The skin around the blisters may be prone to cracking and peeling. After the blisters form, they merge and burst, leaving crusty skin.

There are two subtypes of pustular psoriasis. Palmoplantar pustulosis (PPP), also called acropustulosis, is limited to the palms of the hands and soles of the feet. Generalized pustular psoriasis (GPP), also referred to as von Zumbusch psoriasis, is widespread. Pustular psoriasis is very painful and can be debilitating. In particular, GPP can be life-threatening, requires urgent medical treatment, and may require hospitalization.

Pustular psoriasis can occur at any age. Flares-ups can come on rapidly and be accompanied by fever and malaise. Pustular psoriasis can be difficult to treat and prone to flares. If topical treatment fails, systemic treatment such as methotrexate or cyclosporine may be required. Psoralen + UVA treatment — which uses ultraviolet light — can also be helpful.

Erythrodermic psoriasis can be life-threatening. It requires immediate medical treatment and hospitalization to help your body regulate fluid balance and temperature. Treatment usually involves a combination of systemic immunomodulators, topicals, and oral treatments.

Symptoms of psoriatic arthritis can include:

Are you living with psoriasis? Share your experience in the comments below, or start a conversation by posting on MyPsoriasisTeam.

Kelly Crumrin is a senior editor at MyHealthTeams and leads the creation of content that educates and empowers people with chronic illnesses. Learn more about her here.

Are you treating your psoriasis or psoriatic arthritis and experiencing hair loss? You’re not...

Are you treating your psoriasis or psoriatic arthritis and experiencing hair loss? You’re not...
read article >

MyPsoriasisTeam members interested in getting gel or acrylic nails often wonder if manicures or...

MyPsoriasisTeam members interested in getting gel or acrylic nails often wonder if manicures or...
read article >

“Has anyone had any experiences with piercings and psoriasis?” one MyPsoriasisTeam member asked....

“Has anyone had any experiences with piercings and psoriasis?” one MyPsoriasisTeam member asked....
read article >

“I love my hot tub but don't know if it makes things worse,” one MyPsoriasisTeam member asked the...

“I love my hot tub but don't know if it makes things worse,” one MyPsoriasisTeam member asked the...
read article >

Complete skin clearance means all outward signs of psoriasis on the skin are gone.Complete skin...

Many people with psoriasis have trouble sticking to their treatment plan, which can lead to poor...

Many people with psoriasis have trouble sticking to their treatment plan, which can lead to poor...
read article >

© 2022 MyHealthTeams. All rights reserved.
MyPsoriasisTeam is not a medical referral site and does not recommend or endorse any particular Provider or medical treatment.
No information on MyPsoriasisTeam should be construed as medical and/or health advice.