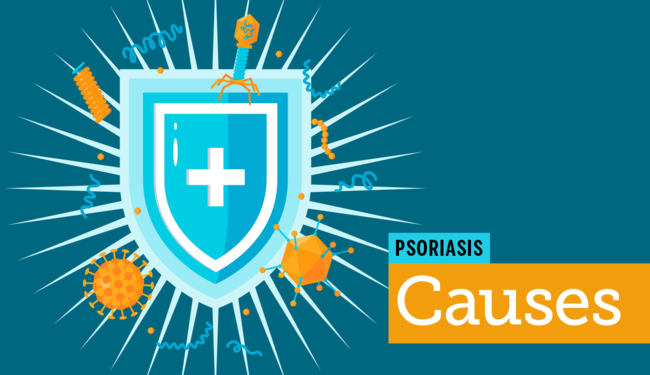 Psoriasis is an autoimmune disease. Its immune system dysfunction manifests as a rash on the body or arthritis in the joints. In other words, the damage in psoriasis and psoriatic arthritis is caused by the body’s immune system attacking its own tissues.

Immune cells called T cells are responsible for attacking invaders like bacteria. In psoriasis, T cells attack the skin, and in psoriatic arthritis, they attack the joints. At the same time, the body releases cytokines and other proteins that cause inflammation — redness, swelling, pain, and heat — in areas where the disease is active.

As a result of autoimmune attacks, the body produces new skin cells at a highly accelerated rate. People without psoriasis replace their skin cells about once a month, shedding old cells as they are replaced. In psoriasis, skin cells are replaced every few days, but they cannot be shed that quickly, resulting in the build-up of thick, scaly skin seen in plaque psoriasis. The exact cause of this is not completely clear.

It is important to note that while science is good at finding correlations, or apparent relationships, between factors and disease, correlation does not prove that the factor causes the disease. Many risk factors for psoriasis and psoriatic arthritis have been identified and are being studied, but none have been pinpointed as the cause of psoriasis. This disease involves multiple genes (polygenic), and varying circumstances can trigger it.

Psoriasis does not appear to be directly inherited from parents in any clear genetic pattern. However, people with a relative who has psoriasis do have a higher risk for developing the disease. In fact, approximately one-third of people living with psoriasis have a relative who has also been diagnosed with psoriasis. Multiple genes are likely involved in predisposition for psoriasis, but only 2 percent or 3 percent of people with those genes will actually develop psoriasis. For someone with a genetic predisposition to psoriasis, certain changes in the immune system can lead to the development of symptoms.

People with psoriasis or psoriatic arthritis also have a higher risk for developing other chronic conditions, including type 2 diabetes, heart disease, Crohn’s disease, ulcerative colitis, and hypertension (high blood pressure). Psoriasis does not cause these conditions, but they may share genetic, environmental, and lifestyle risk factors.

Smoking raises the risk for developing psoriasis. In one study of women with psoriasis, current smokers were 78 percent more likely to develop psoriasis than nonsmokers, and the risk for past smokers was 37 percent higher than for nonsmokers.

Infections, including those caused by bacteria such as streptococcus (the cause of strep throat), are known to trigger flares in people with psoriasis. Some scientists believe strep infections set off the initial immune reaction that causes psoriasis to develop. The link between an upper respiratory infection and guttate psoriasis is strongest. Strep infections affect the immune system and are known to cause similar autoimmune attacks in cases of rheumatic heart disease and some cases of kidney disease.

There is evidence of a connection between obesity (defined as having a body mass index of 30 or higher) and psoriasis. Scientists are uncertain whether being obese increases a person’s risk for developing psoriasis, or whether having psoriasis raises the risk for being obese. Both obesity and psoriasis share a common factor of inflammation. Severity of psoriasis symptoms also seems to increase as BMI increases.

Psoriasis and psoriatic arthritis can go into remission, a period of minimal or no symptoms which can last for months or years until the next disease flare. Many situations can trigger flares of psoriasis and psoriatic arthritis symptoms. Some flare triggers are also being researched as possible causes of psoriasis, but most are not thought to cause the disease itself. Flare triggers are conditions that increase inflammation and stimulate autoimmune attacks, bringing new or worse psoriasis symptoms.

Triggers differ between people with psoriasis. Common triggers include:

Psoriasis is not contagious. You cannot catch it by touching someone with psoriasis, even if they are in a flare state with visible rash. Unfortunately, fear of contagion is a common stigma that socially impacts people living with psoriasis.

I wouldn't be surprised. I have found myself reacting to allergens and back when I took allergy shots it affected my arthritis.

Quiz: Is Your Psoriatic Arthritis Under Control?

Quiz: Is Your Psoriatic Arthritis Under Control?

Research has shown that certain foods can worsen psoriasis, while making dietary changes and...

Research has shown that certain foods can worsen psoriasis, while making dietary changes and...
read article >

Nearly 90 percent of people diagnosed with psoriatic disease have trouble sleeping. In many...

Nearly 90 percent of people diagnosed with psoriatic disease have trouble sleeping. In many...
read article >

Psoriasis in children, also called pediatric psoriasis, is a chronic (long-term) disease that...

Though psoriasis is most common in teenagers and adults, the skin condition can affect children...

Though psoriasis is most common in teenagers and adults, the skin condition can affect children...
read article >

XTRAC Laser Treatment for Psoriasis: Does It Work?

Many options exist for treating psoriasis, a chronic skin disease characterized by thick,...

XTRAC Laser Treatment for Psoriasis: Does It Work?

Psoriasis and Fatigue: Why Am I So Tired?

Psoriasis and Fatigue: Why Am I So Tired?

Psoriasis is an autoimmune disease in which skin cells grow and build up faster than normal. Some...

Psoriasis is an autoimmune disease in which skin cells grow and build up faster than normal. Some...
read article >