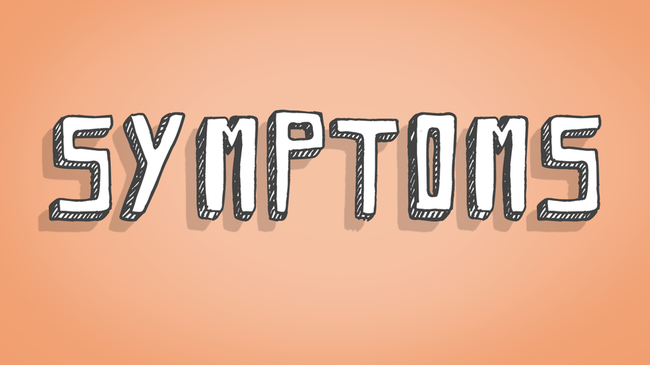 Symptoms of psoriasis vary in each individual and can change over time. In most people with psoriasis, symptoms may decrease or disappear during periods of remission, only to reappear or worsen with subsequent disease flares. In some types of psoriatic arthritis, joint symptoms are progressive and can lead to disability and severe joint deformity.

Skin symptoms vary by what type of psoriasis a person has. Scalp psoriasis affects many patients and appears as severe dandruff on the scalp with raised, red and scaly plaques on the scalp. These plaques usually are very itchy. Any type of psoriatic disease can affect the nails.

Plaque psoriasis makes up 80 percent of psoriasis cases. Plaque psoriasis typically affects the elbows knees, back, and scalp, but may appear elsewhere. Common symptoms of plaque psoriasis include patches (plaques) of thick, reddened, inflamed skin that can crack or bleed easily. Plaques are often covered with white or silver scales. Plaques cause intense itching, burning, and soreness.

In guttate psoriasis, patches of rash are small, pink or red, and scaly. They have a round or oval shape. Guttate psoriasis can affect any part of the body except the palms of the hands and soles of the feet, but it commonly is confined to the arms, legs, chest, and scalp. This form of psoriasis is often associated with a preceding upper respiratory infection.

Inverse psoriasis causes smooth patches of skin that are red and painful. Inverse psoriasis usually appears in areas where sweat and friction occur, such as the armpits, genitals, and under the breasts. This form is often confused with fungal infections of the skin.

Pustular psoriasis — an uncommon form of the condition that is difficult to treat — causes red skin with sterile, pus-filled blisters.

Erythrodermic psoriasis is the rarest type of psoriasis. It can affect the whole body, causing a red rash that peels, itches, and burns. Commonly, this form presents with fever, chills, and dehydration. It often requires hospitalization.

Psoriasis and psoriatic arthritis can affect fingernails and toenails in various ways. Nails may become thick and ridged, pitted, loose, or crumbly. Nails may become discolored by spots of white or thin black lines, or appear yellow-red underneath. Some people with psoriasis develop inflammation or fungal infections in the nails due to the underlying nail dystrophy caused by psoriasis.

People diagnosed with psoriatic arthritis (PsA) may have stiffness, pain, and swelling in joints and over tendons. Left untreated, PsA can cause joint damage that may lead to disability and severe joint deformity. In some people, PsA leads to ankylosing spondylitis, inflammation in the spine and hips that can cause the bones to fuse.

Fatigue is a very common symptom of psoriasis and psoriatic arthritis due to high levels of inflammation in the body. Psoriatic arthritis can be associated with anemia — low red blood cell count — which can contribute to fatigue. Depression and anxiety are common in psoriatic disease, as in all chronic diseases.

Due to pain and itching, many people with psoriasis and psoriatic arthritis experience insomnia, often referred to as “painsomnia.” As a result, tiredness is common.

Psoriatic disease can cause uveitis (eye inflammation) that involves pain, redness, and light sensitivity. Left untreated, uveitis can progress and lead to loss of vision.

At What Age Do Psoriasis Symptoms Appear?

Do Psoriasis Symptoms Go Away?

Psoriasis and psoriatic arthritis symptoms may appear during a flare and diminish during a remission period. Psoriatic disease is a chronic condition that does not currently have a cure. In most people, symptoms can be effectively treated with topical and systemic medication, light therapy, and lifestyle changes.

Where Does Psoriasis Show Up On the Body?

Patches are most commonly found near joints, such as elbows and knees, scalp, legs, feet, and face. Some types of psoriasis can occur anywhere on the body, including finger- and toenails, inside the mouth, and around the genital areas.

Psoriasis can cause several different types of rash, but the most common appearance of psoriasis is thick, reddened patches of skin covered with dry, whitish scales.

I am gonna try this. I have been taking a few tablespoons of apple cider vinegar everyday. I am gonna mix up this concoction Thank yoi