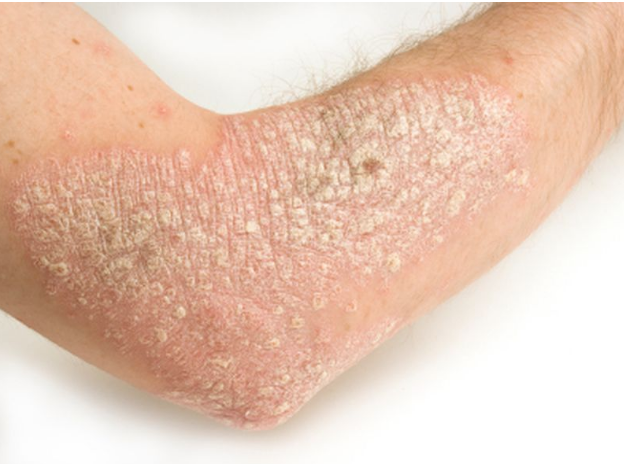 By Robert Preidt, HealthDay Reporter MONDAY, Nov. 20, 2017 (HealthDay News) -- People with the skin disease psoriasis are at increased risk for type 2 diabetes, and the more severe the psoriasis, the greater their risk, a new study finds.Researchers examined data on nearly 85,000 adults in the United Kingdom, including 8,100 who had psoriasis. Compared with people who did not have psoriasis, the risk for diabetes was 21 percent higher among those with psoriasis on 2 percent or less of their body. It was 64 percent higher among those with psoriasis on more than 10 percent of their body.

For every 10 percent increase in body area with psoriasis, the risk for diabetes rose another 20 percent. For instance, people with psoriasis on 20 percent of their body had a nearly 84 percent increased risk for diabetes. And those with psoriasis on 30 percent of their body had a 104 percent increased risk, the study authors said.When applying their findings to the number of people worldwide who have psoriasis, the researchers estimated that psoriasis is linked to 125,650 new cases of type 2 diabetes each year.The study was published online recently in the Journal of the American Academy of Dermatology.Psoriasis, which affects about 7.5 million Americans, is a disease of the immune system in which inflammation causes skin cells to multiply faster than normal."The type of inflammation seen in psoriasis is known to promote insulin resistance, and psoriasis and diabetes share similar genetic mutations suggesting a biological basis for the connection between the two conditions we found in our study," said senior author Dr. Joel Gelfand. He is a professor of dermatology and epidemiology at the University of Pennsylvania."We know psoriasis is linked to higher rates of diabetes, but this is the first study to specifically examine how the severity of the disease affects a patient's risk," he explained in a university news release."These findings are independent of traditional risk factors for diabetes and still show a strong connection between the increasing severity of psoriasis and the increasing risk of developing diabetes, which makes a strong argument for a causal relationship between the two," according to Gelfand.However, the study does not prove a cause-and-effect link, just an association.People with psoriasis should be checked routinely for how much of their body is affected by the disease, Gelfand noted. In addition, these patients should be targeted for diabetes prevention -- especially those with psoriasis on 10 percent or more of their body.SOURCE: University of Pennsylvania, news release, Nov. 14, 2017Note: This article was published more than one year ago. The facts and conclusions presented may have since changed and may no longer be accurate.Copyright © 2017

Here are some questions and conversations from MyPsoriasisTeam:

• "My fingers and toes have been very sore and aching. I guess I should be grateful for what's going on regardless. I still move around very well, not using any devices so I consider myself lucky. I don't take any medication for pain because I am an insulin dependent diabetic and do not want my kidneys ruined, so I just put up with it!"

• "I actually don't allow it to run my life. I'm always happy and positive. I have pustular psoriasis and I'm diabetic."

• "I basically just sit back and watch it spread and swear every time a new plaque appears. Good times. I also have Type 2 diabetes, which was close to under control..."

Are you living with psoriasis and diabetes? Share your experience in the comments below or directly on MyPsoriasisTeam.

Hi Donna. Are any of these drugs that treat psoriasis safe? They all come with such dangerous risks, it's very scary.